Elderola Berries Chewable is a combination of European black elderries and acerola berries.

European black elderberry is distinguished for its high polyphenol content and high proportion of vitamins, minerals and trace elements.

Acerola berries are a thin skinned, bright red, cherry-like fruit that grow on trees in tropical regions of Americas. The fruits prized for its high vitamin C content and also as a powerful antioxidant.

Each chewable tablet is equivalent to 3.52g of fresh black elderberries.

Keep in a cool and dry place. 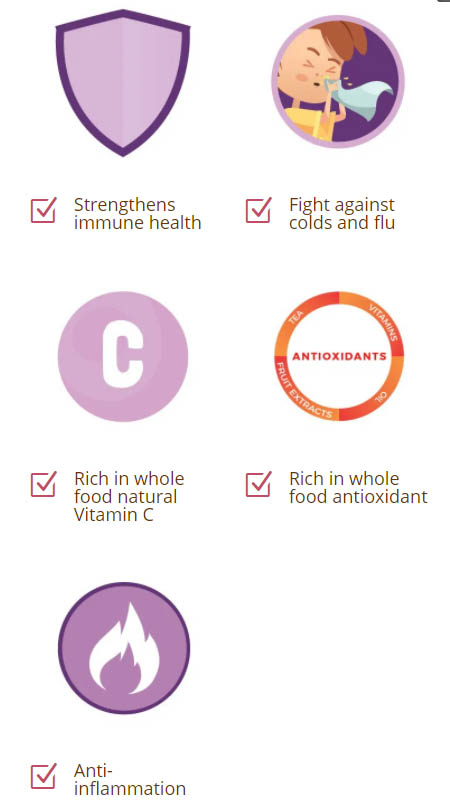 Elderberry is a small purple berry from the European black elder bush (Sambucus nigra). It has a rich source of antioxidants known as anthocyanins. Many of elderberry’s health benefits can be attributed to anthocyanin. Anthocyanin works by clearing the body of free radicals that damage cells at the DNA level. It also has antiviral properties that may prevent or reduce the severity of certain common infections and flu.

Elderberry also exerts anti-inflammatory effects, reducing swelling and pain by tempering the body’s immune response. In addition, elderberries are both low in calories and rich in vitamins and minerals — a double bonus in the world of nutrition.

Anthocyanins are a type of flavonoid, a class of compounds with antioxidant effects. They are found naturally in several foods and give red, purple, and blue plants their rich colour. In addition to acting as antioxidants and fighting free radicals, anthocyanins may offer anti-inflammatory, anti-viral, and anti-cancer benefits.

Plants produce anthocyanins as a protective mechanism against environmental stressors, such as ultraviolet light, cold temperatures, and drought. This production of anthocyanins in roots, stems, and especially leaf tissues is believed to provide resistance against these environmental hazards. This protection is then passed on to us when we consume the elderberry fruit.

Acerola berries are thin skinned, bright red, cherry-like fruit that grow on trees in tropical regions of Americas. The fruits prized for its high vitamin C content and also as a powerful antioxidant. Traditionally, acerola has been used to treat coughs and colds, fever, dysentery, diarrhea, and liver disorders.

Acerola is rich in antioxidants, including vitamin C and anthocyanins. Because of this, it is often used to help with or prevent colds and flu. A study published in 1997 that examined the vitamin C content of fruits like pineapple, cashew, guava, kiwi, orange, lemon, and strawberry, found that acerola packed more of the nutrient than any fruit other than camu-camu.

Natural Vitamin C is a complex of several naturally occurring elements synergistically present and bonded to provide the complete beneficial effects of vitamin C Complete vitamin C is composed of many co-factors such as bioflavonoids, rutin, Factor J, Factor K, Factor P, Tyrosinase, Ascorbinogen, Ascorbic acid and other components. Each of these is vital to the complete biological activity that enables vitamin C to function fully. Acerola berries are rich in natural Vitamin C. It aids in many biological functions, including the synthesis of collagen, the healing of wounds, and the repair and maintenance of cartilage, bones, and teeth. Vitamin C is also an antioxidant, meaning that it can neutralize free radicals that can damage cells at the genetic level. In a study of various vitamin C-containing fruits and their relative amounts, acerola outperformed all the rest, especially when grown organically. The fruit has reportedly higher amounts of vitamin C than even oranges and strawberries, and it’s only outdone by rosehips.

There are no reviews yet.

Be the first to review “Elderola Berries Chewable” Cancel reply