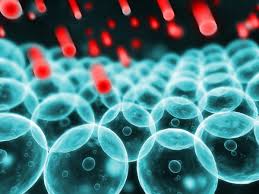 Free radicals are atoms or molecules with an unpaired electron. Our bodies constantly produce them as a result of normal metabolism when we produce energy. In large quantities, free radicals can be harmful. Free radical damage is thought to be responsible for heart diseases, a lot of cancers, aging and muscle soreness after exercise.

Scientists have found that the level of free radicals increases after exercise because our bodies consume a large amount of oxygen. No one knows why or how physical activity does his but many think that it is connected to energy metabolism.

Free radicals generation can be influenced by external factors like environmental contaminants and pollution. Inhaling second hand cigarette smoke increases free radical load tremendously and is extremely harmful to our bodies. Just how bad can cigarette smoke can be? Take this: Each puff contains about 4,700 different chemicals and 100 trillion free radical. These chemicals and free radicals can damage lung tissues by chemically reacting with your DNA and cells in the lung.

We all live in a toxic environment. No matter where we live or how careful we are, we can’t avoid environmental toxins. Similar to cigarette smoke, toxic chemicals, pesticide, petroleum based products, industrial chemicals like toluene, benzene and formaldehyde contribute to the formation of free radicals.

Prolonged exposure to ionizing and UV radiation such as from sunlight and x-rays causes unhealthy free radical generation too. Studies has shown that ultraviolet light promotes free radical formation in our skin, leading to aging and cancer. UV radiation can also cause skin damage and wrinkles and reduced immunity from infections. While we still do not fully understand the process, some scientist has suggested that the possible mechanisms for UV skin damage are collagen breakdown, the formation of free radicals, interfering with DNA repair, and inhibiting the immune system.