Why Allergies are So Common Today ? 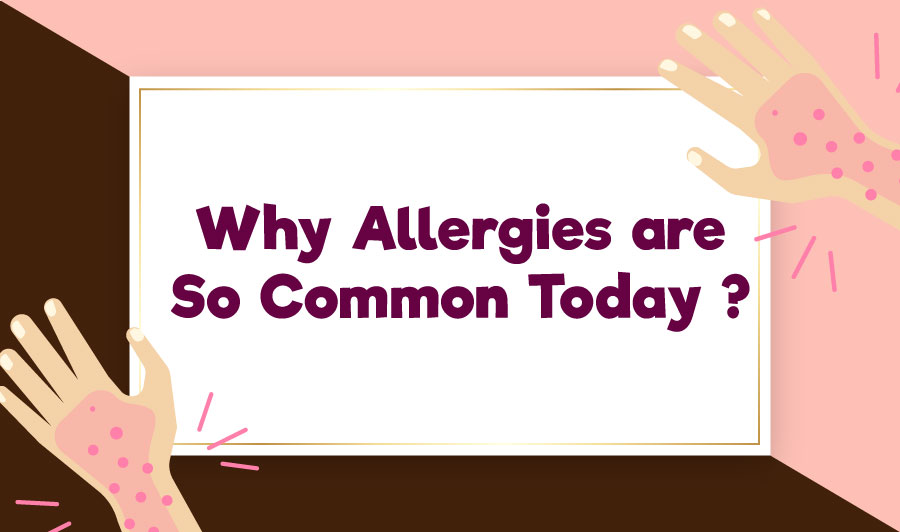 Allergies are reactions caused by the immune system as it responds to environmental substances that are usually harmless to most people. They may occur in response to a range of different material (called allergens), such as food, pollen, dust mites, animals, insect stings, or medicines.

An allergy can affect different parts of the body. Allergic rhinitis, or hay fever, for instance, affect the nose and eyes, while eczema affects the skin.

Food allergies affect the gut, skin, airways, lungs, and sometimes the entire body through the blood vessels. Other conditions such as asthma, which affects the lungs, and eosinophilic oesophagitis, which affects the tube from the throat to the stomach, are closely related to allergy. But they have slightly different underlying causes.

So, why allergies are so common today?

There are some food allergy factors that explain the reason:

1) Decreased exposure to infections or microbes – or both – in early life could lead to an increased risk of allergy. This is commonly referred to as the hygiene hypothesis, first suggested in 1989. Research showing children who have close contact with pets or livestock and those who come from larger families are less likely to develop allergies have indirectly supported the hygiene hypothesis.

2) Delayed introduction of allergenic foods, such as eggs and nuts, until later in childhood could also have an impact. This is one of the most recent theories resulting from the LEAP study, published in 2015. This randomized trial for early life peanut consumption in a population at increased risk of developing peanut allergies demonstrated that exposure to the nut early in life is protective against developing the allergy.

3) Different methods of preparing foods can impact the degree to which they invoke an allergic response; roasting peanuts, for instance, greatly increases allergenicity while boiling reduces it. This may in part explain a difference in the incidence of in peanut allergy between certain countries.

4) Allergies may develop after exposure to allergens, such as dairy products or nut oils in skin moisturizers, particularly on inflamed sites, such as eczema.

5) Altered gut bacterial species due to low-fiber diets and widespread antibiotic usage may alter the body’s immune function and create an allergy.

Peanut is the most prevalent allergen, followed by milk and then shellfish. Rounding out the top eight (not in any particular order) are tree nuts, egg, wheat, soy, and fish. Peanuts not only are the most common allergen but typically cause the most severe reactions.

Is Probiotics can Reduce Allergies?

While it appears that babies exposed to antibiotics have higher rates of allergic disorders, there’s no clear evidence that taking probiotics early in life can limit the development of food allergies. There are, however, a number of compelling studies that demonstrate that probiotics, especially if taken during pregnancy and by breast-feeding moms during lactation, can greatly reduce the incidence of allergic eczema in children.

How Probiotics can help you Prevent and Fight Allergies

Why Allergies are So Common Today?

The Side Effects of Using Topical Steroids

Why Allergies are So Common Today ? was last modified: January 30th, 2019 by Admin