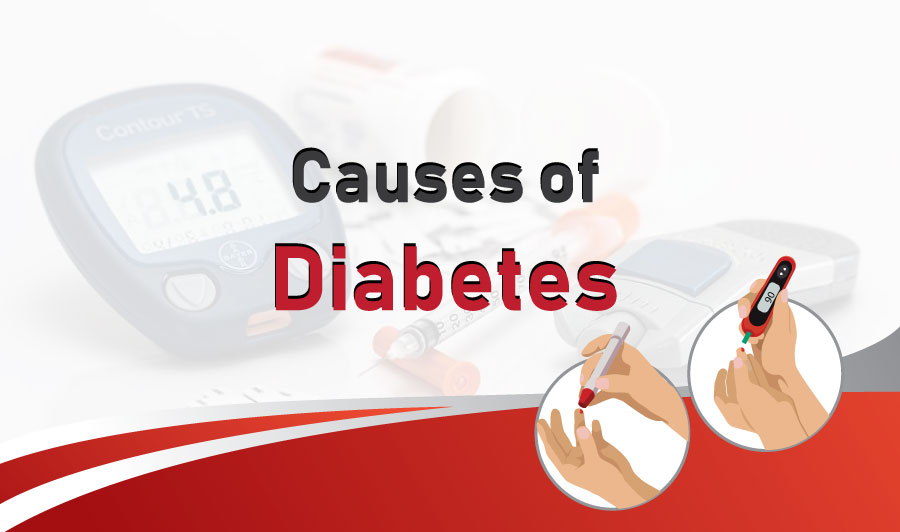 Diabetes mellitus is a group of metabolic diseases characterized by high blood sugar (glucose) levels that result from defects in insulin secretion, or its action, or both. Diabetes mellitus, commonly referred to as diabetes was first identified as a disease associated with “sweet urine,” and excessive muscle loss in the ancient world. Elevated levels of blood glucose (hyperglycemia) lead to spillage of glucose into the urine, hence the term sweet urine.

Normally, blood glucose levels are tightly controlled by insulin, a hormone produced by the pancreas. Insulin lowers the blood glucose level. When the blood glucose elevates (for example, after eating food), insulin is released from the pancreas to normalize the glucose level by promoting the uptake of glucose into body cells. In patients with diabetes, the absence of insufficient production of or lack of response to insulin causes hyperglycemia. Diabetes is a chronic medical condition, meaning that although it can be controlled, it lasts a lifetime.

Type 1 diabetes occurs when the immune system attacks and destroys the insulin-producing cells in the pancreas (the beta cells). As a result, the body is left without enough insulin to function normally (i.e. it becomes insulin deficient). This is called an autoimmune reaction, because the body attacks itself and produces antibodies to its own insulin-producing cells, thereby destroying them.

Researchers don’t exactly know why this process is activated in some people. Apart from a possible genetic predisposition, the following triggers may be involved:

When a person with type 1 diabetes develops symptoms, most of the beta cells in the pancreas have already been destroyed.

The causes of type 2 diabetes are multifactorial and complex. But even though there is no single cause, there are some well-known predisposing factors – the most overwhelming being obesity and a family history of type 2 diabetes.

Type 2 diabetes is the result of both insulin resistance (when the cells don’t respond well to insulin and can’t easily take up glucose from the blood) and progressive beta-cell damage, resulting in too little insulin being secreted by the pancreas.

By the time a person is diagnosed with type 2 diabetes, up to 50% of the beta cells in the pancreas have usually been damaged. In fact, these cells may have been declining for up to 10 years before the diagnosis. Along with raised blood pressure and elevated cholesterol levels, this predisposes the person to arterial damage years before diabetes is diagnosed. So, at the time of diagnosis, the person is already at risk for cardiovascular disease (CVD).

Your risk of getting type 2 diabetes is higher if:

It isn’t known exactly why some women develop gestational diabetes, but there is often a positive family history of diabetes.

The woman’s weight may also play a role. Changing hormone levels and weight gain are part of a healthy pregnancy, but both changes make it more difficult for the body to keep up with its need for insulin. This may lead to gestational diabetes. As pregnancy progresses, the placenta also produces insulin-blocking hormones, which might result in a woman’s blood-glucose levels becoming elevated if there isn’t enough insulin to counter this effect.

Glucose is a simple sugar found in food. Glucose is an essential nutrient that provides energy for the proper functioning of the body cells. Carbohydrates are broken down in the small intestine and the glucose in digested food is then absorbed by the intestinal cells into the bloodstream, and is carried by the bloodstream to all the cells in the body where it is utilized. However, glucose cannot enter the cells alone and needs insulin to aid in its transport into the cells. Without insulin, the cells become starved of glucose energy despite the presence of abundant glucose in the bloodstream. In certain types of diabetes, the cells’ inability to utilize glucose gives rise to the ironic situation of “starvation in the midst of plenty”. The abundant, unutilized glucose is wastefully excreted in the urine.

Insulin is a hormone that is produced by specialized cells (beta cells) of the pancreas. (The pancreas is a deep-seated organ in the abdomen located behind the stomach.) In addition to helping glucose enter the cells, insulin is also important in tightly regulating the level of glucose in the blood. After a meal, the blood glucose level rises. In response to the increased glucose level, the pancreas normally releases more insulin into the bloodstream to help glucose enter the cells and lower blood glucose levels after a meal. When the blood glucose levels are lowered, the insulin release from the pancreas is turned down. It is important to note that even in the fasting state there is a low steady release of insulin than fluctuates a bit and helps to maintain a steady blood sugar level during fasting. In normal individuals, such a regulatory system helps to keep blood glucose levels in a tightly controlled range. As outlined above, in patients with diabetes, the insulin is either absent, relatively insufficient for the body’s needs, or not used properly by the body. All of these factors cause elevated levels of blood glucose (hyperglycemia).

Prediabetes Is Reversible – The Surprising Truth About Prediabetes

The Importance of HbA1c Test for Diabetes

How to Prevent Diabetes?

A Study of Ashitaba on Patients with Metabolic Syndrome

Causes of Diabetes was last modified: October 24th, 2019 by Admin